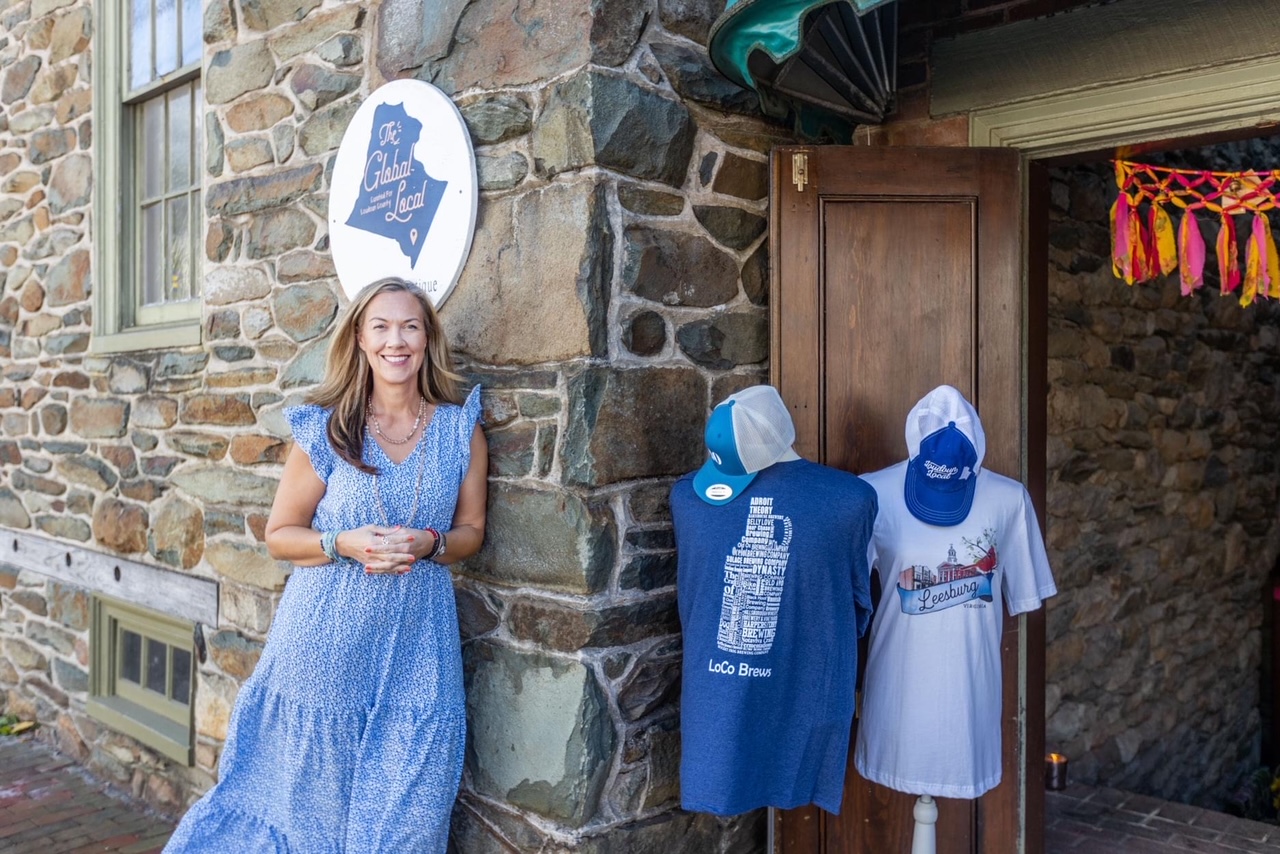 Business SPOT LIGHT: Get to Know The Global Local

“The Global Local is a buzzing, vibrant, local shopping space designed with the town square marketplace in mind. Every item is carefully curated for Loudoun County through a collection of
handpicked, local and global, socially-conscious vendors. We offer an eclectic mix of locals-only
home goods and apparel as well as specialty women’s, men’s and children’s gifts.”

I moved to DC in 1997 to work on my Masters in Public Policy from Georgetown University.
I met my hubby, John in my second year, who was working for the State Department as a Foreign Service Officer. We married June 19, 1999 right here in Loudoun County at Raspberry Plain Manor
and were on our way overseas October 1, 2001!

We lived overseas for 15 years moving every 2 years to new and exotic locations throughout the
Middle East and Europe; India, Tunisia, Syria, Dubai, The Netherlands and Jerusalem. It was during
this time abroad that I fell in love with the global bazaar/souk type of shopping experience, and it
was here, in these markets that the dream of The Global Local was born. You didn’t go to the market
to just grab something and go home, you went for the experience. It was a social treat to wander
through the open air markets, mingling with locals and vendors alike, taking time to absorb all the sights, sounds and flavors that surrounded you. I came back to Loudoun County with the dream of recreating this exciting shopping space for locals in my community. Along the way, we grew our family and have 4 incredible kids who each will make their mark on the world in unique ways: Meaghen 21, Liam 18, Abby 16 and Evelyn 12. They have all been incredibly supportive of this journey and are my biggest cheerleaders!

We’re proud to help local consumers shop for mindful goods. We aim to spread positivity both at home and around the world. When selecting vendors, we prioritize the artists and brands that give back and our global vendors guarantee a living wage for their artisans.

Locally, we support several Loudoun Charities and Service Organizations such as Loudoun Cares, Women Giving Back, LAWS, the Loudoun Arts Council, Mobile Hope, and the Loudoun Wildlife Conservancy. We are also actively involved in the Loudoun Chamber of Commerce and have recently

joined the Prevention Alliance of Loudoun as a coalition partner. We are incredibly grateful to have been invited to be a resource partner for the Loudoun Bed and Breakfast Guild.

There are so many artists, entrepreneurs, makers and farmers, small businesses, and promising startups in our county! We have been so lucky to have collaborated with many of them and hope to continue adding local artists and businesses to our list of partners. First Fridays are BACK in downtown
Leesburg and we are so excited! We showcase a different artist every month, inviting them to do live demonstrations of their crafts for the duration of the evening. We also host artist workshops in our secret

garden, such as clay and metal earrings, flower bouquet making, and decoupage oyster shell dishes to name a few!

The best part about being a small business in Loudoun County, are the people. We have made meaningful relationships with fellow entrepreneurs that will last a lifetime. They inspire and encourage us, look out for and commiserate with us. And most importantly they are there to enjoy this incredible experience with us.

We are grateful everyday to the people of Loudoun County for helping to make our dream come true. We look forward to continuing to share our Global Local experience with you all! 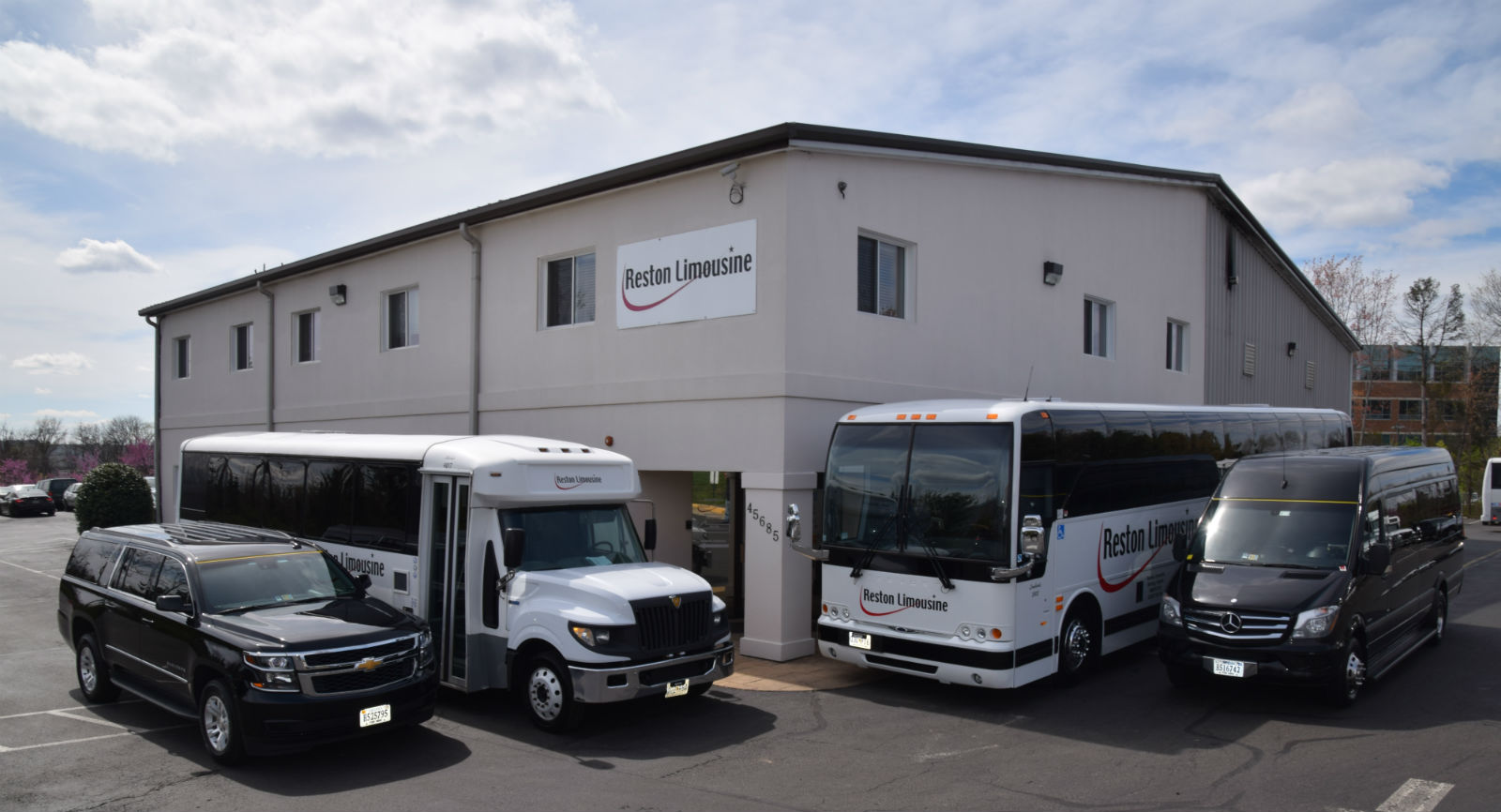 Many people have refined their “elevator pitch” to keep it concise and within the one-minute time frame we have all been instructed to perfect.

Kristina Bouweiri has also perfected her elevator speech. But because her path to where she is now (owner and CEO of Reston Limo) was not a straight line, her elevator pitch is a bit longer than the prized one minute.

Born in Japan and having lived in more than six countries in 18 years, her parents were employed by the Foreign Service, Kristina never saw herself as a business owner settled in Loudoun County, VA but then again, her life isn’t a straight line.

After living overseas, Kristina came to the states to attend George Washington University where she’d graduate with a degree in International Affairs. While attending GWU, she got an internship with the Overseas Education Fund (whose mission it is to lift the status of women in third-world countries), and the plan was to follow in her father’s footsteps – especially when they offered her a job as a program associate for its African department – which took her Somalia and Kenya.

However, the straight line curved when she realized that the non-profit world was not for her, so she returned to the U.S. The job market was tough, but so is Kristina, and she took a commission only advertising sales job working out of the Westin Hotel in Washington D.C. Her days consisted of cold calling businesses she found in the yellow pages (for anyone scratching their head wondering what in the world that is, think of a paper/book version if Google and LinkedIn collided) and one day she stumbled on William Bouweiri, owner of Reston Limousine Service, Inc. He agreed to an appointment and Kristina made her advertising sales pitch. Not only did she seal the deal with a sale, but she got a date too! And again, the line took a turn when, less than a year later, their whirlwind romance led to marriage and Kristina joined William at Reston Limo.

When Kristina first joined William, Reston Limo was a fleet of five cars that serviced corporate clients. It didn’t take long for Kristina to recognize the value in diversifying the business and expanding their markets. With the wedding business booming here in Loudoun County, the most obvious market to pursue was the wedding industry and before they knew it, Reston Limo would routinely have 40+ weddings on the books each weekend! The next growth spurt for Reston Limo was when Kristina started bidding on government contracts – and winning every contract she bid on!

Not only was the business growing but William and Kristina’s family was as well. They quickly had four kids and knew they needed a bigger house, so William oversaw the building of their custom home in Leesburg while Kristina continued to work and grow the business. It wasn’t long before they realized that Kristina exceled at running Reston Limo and William loved being a stay-at-home dad. However, the line would curve again when they both realized that marriage wasn’t in their cards, so they divorced, and Kristina bought out William for sole ownership of Reston Limo.

Kristina continued to network, not only here in Loudoun County, but Maryland and Washington D.C. as well, and Reston Limo continued to grow. Today, besides weddings, wine tours, government contracts and airport shuttles; Reston Limo can be seen on the George Mason campus providing shuttle service for students, as well as providing shuttle service for well-known construction companies and their employees, local bus trips and sight-seeing tours, and car service for celebrities and dignitaries.

Anyone that has met Kristina would say she is a force of nature, and her list of accomplishments would certainly back that up:

In addition to growing Reston Limo to be one of the Top 10 largest luxury transportation companies in the nation, Kristina founded the monthly networking program Sterling Women and co-founded the annual Virginia Women’s Business Conference – two programs that have helped hundreds of women entrepreneurs and executives achieve their professional goals. She is an active business community leader and has served or currently serves on boards around the DC region and beyond, including Enterprising Women magazine DC Chamber of Commerce, Leadership Greater Washington, Northern Virginia Community College, Inova Loudoun Hospital Foundation, and Loudoun CEO Cabinet, among others. As a member of the Dean’s Advisory Council at George Mason University’s School of Business, she helped launch a Women in Business Initiative program to support students, alumnae and other businesswomen.

Here it is 30+ years later, and the path to get to where she is today might not have been a straight one, and it might not fit into a one-minute elevator pitch, but it has led her be at the helm of Reston Limo where she has grown a fleet of five vehicles to a successful business, with affiliate partners all over the globe, and more than 200 vehicles in its fleet – from sedans to coach buses.

So, the question is, where can Reston Limo take you?